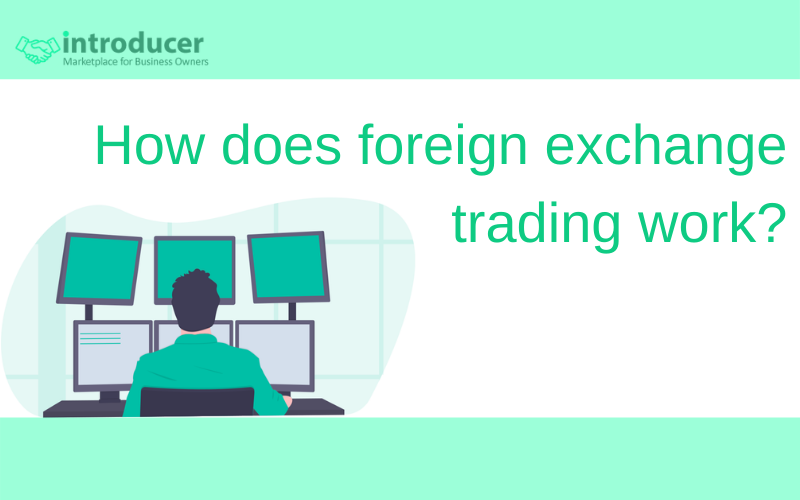 Forex trading abbreviated as FX is the trading of currency with the other. Generally, money exchangers buy the currency of a state at the rate of its international exchange rate and then sell it to the demand. People buy it before going to certain states or because of being in a foreign exchange trading business. The business is highly profitable yet risky because if suddenly due to any clash, situation, failure of diplomacy, etc. the value of a currency is down, the person who bought currency at a high price is in loss unless the currency rate is raised again either to the previous level or even above that. Forex market is the international network of markets connected via brokers, institutions and individual dealers (not common in the very start) and banks, etc. used for trading foreign currency in exchange for the other.

How does forex trading work?

The most important point here is that the foreign exchange market came into existence after the demolishing of the Breton woods system. Afterward, there were many currencies in the market while before, only the UK pound has the power to turn the tables; This was so because of the hegemonic position of Britain, its imperialistic designs, technological moderation, economic prosperity and political stability there.  WWII however, changed the situation for all. Britain itself lost control over many of its areas than gaining independence in the mid of the 20th century. However, since then, with the cold war, USSR and the USA were the power blocs while the USA is winning the situation. Afterward, with the continuous strong position, the   US dollar became the global currency and the most valued currency in the world.

Foreign exchange trading is risky for beginners and even for the people having businesses in this field for a long. One wrong decision can have a major loss depending on the type of lots a person/institution or broker is trading in. Forex trading is the official center for foreign exchange trading having online over the counter users. The profit or loss in the exchange trading is taken but not the physical money. Inflation, political stability, trading volume and type, etc. fluctuate the rates of the currency in the international market.

What is Gross Profit ?

How to improve communication with your clients